“The Noticer” is an anti-Semitic Telegram channel that collects screenshots of anti-racist tweets from people who self-identify as Jewish in order to intimidate them and target them for racist harassment. The avatar for this channel features a bust of the ancient Roman politician Cicero with glowing, laser-like eyes in imitation of a popular photoshop effect found in memes. As of this writing over eleven thousand people subscribe to “The Noticer”. 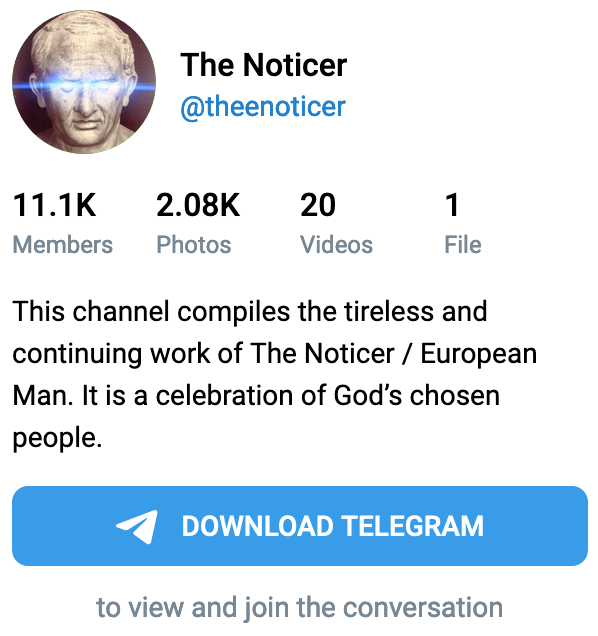 The sinister and violent history of such lists of Jewish people and other targeted groups is well-known, even though “The Noticer” is careful not to call for violence in order not to fall afoul of Telegram’s permissive terms of service. But just because it doesn’t mention violence doesn’t mean it isn’t promoting violence: when a list similar to “The Noticer’s” was proposed on 4Chan an anonymous response called for “Kike genocide.”

“The Noticer” moved to Telegram after it was banned from Twitter, where it had begun its list under the handle @TheEuropeanMan1, a name chosen in keeping with the anti-Semitic belief that Jewish people are somehow racially different from “European” people. This belief, in turn, underlies the conspiracy theory that Jewish people seek to infiltrate and destroy “white” power and culture. “The Noticer’s” focus on anti-racist tweets by Jewish people attempts to cast anti-racism as part of this supposed plot.

Why Cicero? On one level it must be the same impulse that leads many white supremacist writers to adopt Classical pseudonyms: they want to tap into the prestige that ancient writers enjoy in the popular imagination. But Cicero seems to have a special appeal for racists. For example, Pharos has documented that neo-Nazis have made Cicero an early exponent of anti-Semitism by modifying a passage about Jewish people from one of his speeches.

More generally Cicero has often been regarded — including in — as a perceptive critic of the kind of cultural decline that white supremacists obsessively insist modernity is suffering. People who style themselves as bulwarks against such decline, whether in mainstream politics or overt white nationalism, love to quote Cicero’s famous lament about the supposed decline of the Roman Republic, O tempora, O mores (“Oh what an age we live in! Oh what behavior!”). This phrase, in fact, was the title of a long-running column in the newsletter of the white supremacist group American Renaissance, which Pharos has documented for their promotion of outdated ideas about the supposed racial purity of ancient Spartans. This column, like “The Noticer,” presented itself as a monitor of supposedly anti-white news and public policy, saying that it was “keeping watch on the news.” It is also the title of an article Pharos had documented from a race pseudo-science website that uses quotations from the ancient Roman satirist Juvenal to criticize various Obama-era progressive policies. One of the speeches in which Cicero made this famous remark was a speech in which he accused his political enemy Catiline of plotting to murder him (Cicero was consul at that time) and many other senators in order to seize control of the Roman state. This resonance may appeal to “The Noticer,” which implicitly argues that Jewish anti-racists are conspiring against “white” people.

Even if Cicero wasn’t the full-blown racist anti-Semite that the neo-Nazis pretend he was, his legacy is at best a mixed one. He’s been admired for his grand, periodic style of composition, but even in antiquity those same features were called bombastic and swollen. He spoke eloquently against tyranny in his attacks on Mark Antony, but also hedged his bets with Julius Caesar out of political expedience. He presented himself as a champion of the rule of law but ordered the execution of Catiline’s co-conspirators without due process. Perhaps because he was not descended from one of the old aristocratic families of Rome but had been elected to Rome’s highest offices, he often adopted a strongly elitist stance. “The Noticer” doesn’t notice that complexity, or doesn’t think that this complexity compromises Cicero’s status as an admirable model for its hateful project. Those of us attempting to understand the relationship between the Greco-Roman past and white supremacist politics should notice, however, that racists like this assume that a figure from Greco-Roman antiquity can be used straightforwardly as a symbol for white supremacy.

To avoid generating traffic to “The Noticer” we have linked above to archived images of its telegram channel.