Among recent posts at the misogynist site Return of Kings (“3 ways to sleep with women at your job”; “Don’t let your girlfriend have homosexual friends”; “Saudi Arabia grants citizenship to female robot that is more pleasing than most human women”) is a piece entitled “How men can live in the spirit of Plus Ultra,” the national motto of Spain which means, in Latin, “further beyond.” The article argues that men should take inspiration from this motto, and, implicitly, Spain’s early-modern imperial project, and go “beyond” what they believe is possible for themselves, just as Spanish vessels refused to be limited by the traditional boundaries of Europe. 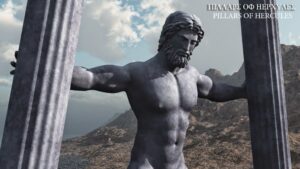 The article’s suggestions for how to live plus ultra are unobjectionable enough: try to lift more weight at the gym, spend a little more time at work. But the article then turns — surprisingly, since it began celebrating the breaking of traditional barriers — to “absolute truths and realities” that “must not be challenged”: “inherent biological differences between the sexes and the need for order in a civilized society.” Such “inherent biological differences” are cited throughout Return of Kings and allied sites in support of oppressive patriarchy, and the “need for order” is a traditional claim in totalitarian propaganda. The article’s political bias is made explicit in its final claim: “We should be conquering new frontiers in colonizing Mars, not trying to redefine gender.”

The article attempts to make Greco-Roman antiquity support this ideology. Heracles, represented in a computer-generated image of the “Pillars of Hercules,” is invoked as a model for today’s man. The article connects the hero with the motto plus ultra by claiming that “according to the stories” the words non plus ultra (“No further beyond”) were inscribed on the pillars, which marked the limit beyond which no one, not even Hercules, could travel. The motto itself, being in Latin, may be expected to confer ancient authority on the phrase and the philosophy it supposedly represents.

As usual the references are more complex than the article recognizes or lets on. We searched the Brepolis Library of Latin Texts (spanning 240 BCE to 1965 CE) and found no association between Hercules and the phrase plus ultra, with or without a negative, before Francis Bacon’s Advancement of Learning (1604), and even there without any reference to the motto appearing on the so-called “pillars”: “for why should a few received authors stand up like Hercules’ Columns, beyond which (ne plus ultra) there should be no sailing or discovering…?” (We may note in passing that, contrary to the image used in the article, the “pillars of Hercules” were a metaphor for a geographical feature, not a literal pair of columns at the edge of the known world).

More significantly, the invocation of Hercules muddles the argument of the piece. It is not just that the caption in the image transliterates the Roman name for the hero, “Hercules,” into Greek script, producing a jumble of letters (ΗΕΡΧΥΛΕΣ) that would be unrecognizable to the ancient Greeks, who spelled his name ΗΡΑΚΛΗΣ/Herakles. The problem lies in whether Hercules is a positive or negative model. Are men today supposed to surpass Hercules, refusing to be limited by the traditional and conventional limits that our ancestors observed? Or are we, like Hercules, supposed to recognize “boundaries to be respected, lines to not cross,” such as those imposed by patriarchal traditions? The article’s way out of this contradiction is to say, in so many words, that we should surpass Hercules when it serves our self-interest while maintaining adherence to regressive and patriarchal politics. Hercules is also an odd role-model for those who espouse such views: although the article’s image represents him as hyper-masculine the ancient sources tell us he enslaved himself to the Lydian queen Omphale and wore her jewelry and dresses while she wore his lion’s skin and brandished his club.

So it’s hard to see why the men on Return of Kings would admire Hercules: submission to women is one of this movement’s cardinal sins. And why did Hercules submit? To atone for the senseless murder of Iphitus that today we would describe as the result of Hercules’ toxic masculinity: a conflict with another powerful man over a woman, property, and prestige. With a myth as complex and multi-faceted as that of Hercules, we’re probably better off not trying to find in him a useful model for how to behave, whether at the gym, at work, or in relation to other human beings. But at least in the terms of this article, it does seem that the great hero was more willing to “redefine gender” than to travel to new worlds.