The “National Policy Institute” (NPI) is a think tank “dedicated to the heritage, identity, and future of people of European descent in the United States and around the world.” It is headed by Richard Spencer, a leader of the U.S. white nationalist movement who is allied with other figures that Pharos has documented. An article on the NPI’s site by disgraced psychology professor Richard Lynn argues that IQ tests show that “Europeans” are intellectually superior to “sub-Saharan Africans.” This article attempts to establish its intellectual legitimacy by beginning with an invocation of antiquity, claiming that “the Greek physician Galen wrote that black Africans are less intelligent than Europeans.” 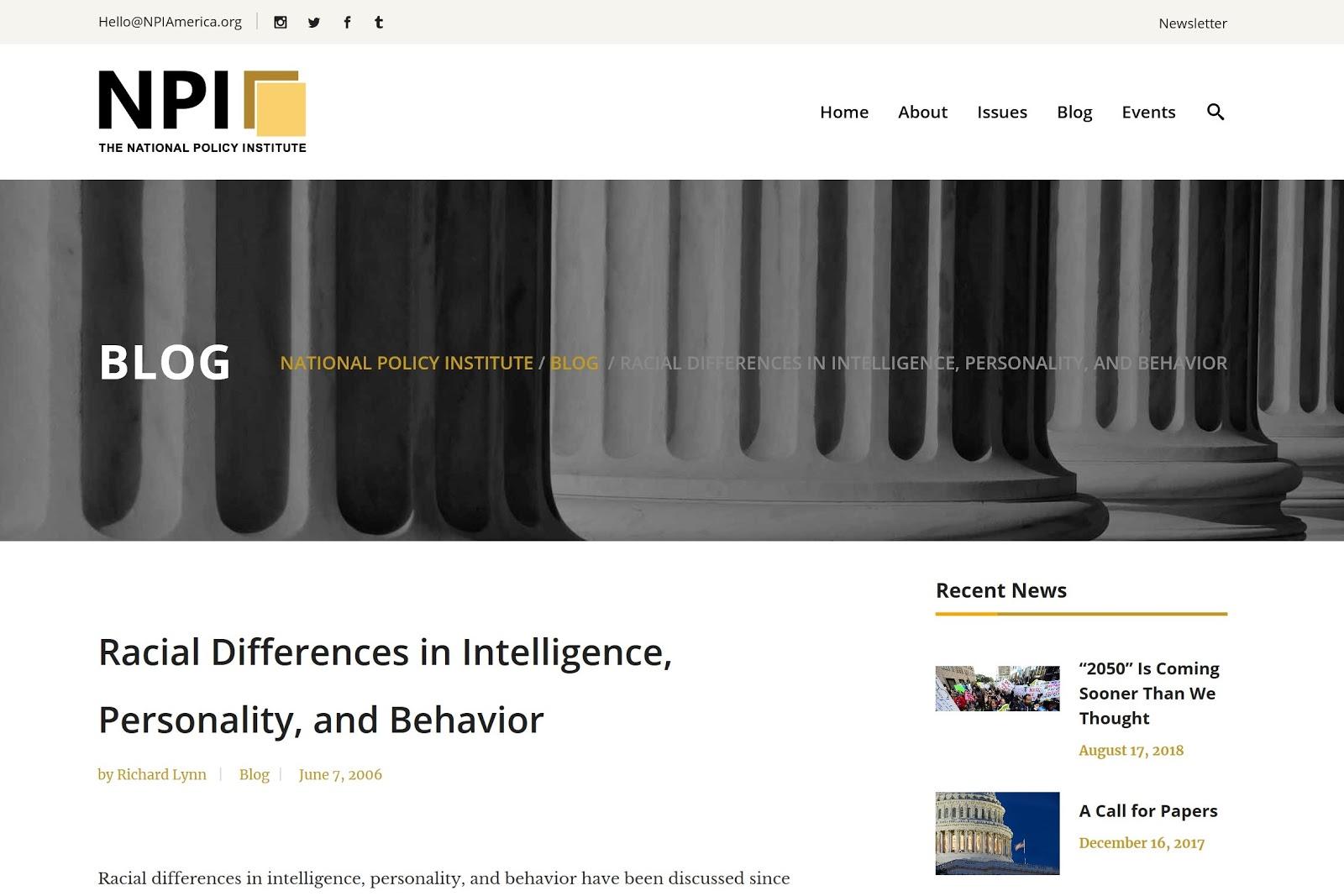 The IQ test on which Lynn bases his argument was developed in 1905 by Alfred Binet. Despite Binet’s arguments that his test does not measure intelligence and research showing that intelligence cannot be measured by such tests, it has a long history of being used to support racial discrimination.  Lynn’s own racist agenda is evident from his discussion of his IQ data: “the low IQ of sub-Saharan Africans,” he writes, “is consistent with their failure to make any of the advances of civilization,” a line of argument that ignores how centuries of colonialism and slavery impoverished Africa in order to prop up “civilization” elsewhere. Lynn goes on to cite the 19th century work of Francis Galton, who was one of the modern fathers of scientific racism, the first person to use the term “eugenics,” and who, like Lynn, seems to have wanted to find support for his theories in ancient Greece.  According to Lynn, Galton’s study of human intelligence “concluded that the Greeks of the classical period were the most highly intelligent people that have ever appeared.”

Lynn’s invocation of Galen, medieval writers who repeat the racist position Lynn attributes to Galen, and Galton himself is intended to substantiate Lynn’s IQ data by showing that it just confirms what has always been known. But investigating the first link in Lynn’s chain — Galen — reveals the shaky and deceptive foundations of Lynn’s argument.

Lynn does not provide a citation for the passage from Galen that he has in mind, but he seems likely to be referring to a quotation that appears several times online: “surely the dark-complexioned person is overwhelmed by merriment due to the imperfection of his brain; therefore, his intellect is weak.” This is not, however, a translation of any line in the corpus of Galen’s writings that Pharos has been able to identify; it is a translation of a passage that quotes Galen in the 10th century Arab historian Al-Mas’udi’s Meadows of Gold and Mines of Gems. We have consulted an edition of Al-Mas’udi’s work as well as several articles discussing this passage and none of them say what passage of Galen is being quoted. That is, the only evidence that Galen says what Lynn says he said is a text written in Arabic seven hundred years after Galen, who wrote in Greek, died. This does not mean that Al-Mas’udi invented the quotation: it could be from one of the works by Galen that survive only in Arabic translations from the period when Islamic scholars translated a large number of classical works into Arabic; it could be from a work for which both the Greek original and the Arabic translation is lost. But to be precise we should say not that “the Greek physician Galen wrote…” but that a tenth century Arab historian reports that the Greek physician Galen wrote that Africans are less intelligent that Europeans.

Except that not even Al-Mas’udi said this much. Lynn’s description of the passage states that Galen is making a distinction between “black Africans and Europeans.” But the passage that Lynn seems to be quoting appears in a section where Al-Mas’udi is comparing people from Asia (“Indians”) to “the dark races,” with no mention of “Europeans.” Lynn has, it seems, imposed the comparison he would like to make onto a passage that actually makes a different comparison. And because he believes that an ancient and Classical source gives his claim more authority than a medieval and Islamic one, he has concealed the fact that we don’t actually have ancient evidence for his claim.

In fact the ancient sources that do survive say the opposite of what Al-Mas’udi and Lynn say. They all associate hot climates, such as is found in Africa, with superior intelligence. Hippocrates, the most influential ancient medical writer before Galen, wrote that people from places that are “scorched by the sun” are, among other things, “acute and ingenious.” The architectural writer Vitruvius says that “keen intelligence” is “due to heat” and that “southern nations have the keenest wits,” while the military theorist Vegetius says that “nations which lie near the sun…have a greater share of genius and knowledge.” As for Europeans, hate groups like to cite Aristotle because of the misogynist and racist views he articulates, but Lynn has conveniently ignored Aristotle’s judgment that “the nations inhabiting the cold places and those of Europe are full of spirit but somewhat deficient in intelligence.” So if Galen really did say what Al-Mas’udi says he did, then he was contradicting Hippocrates and Aristotle. This would be surprising because Galen cites both of them with admiration and approval in his surviving work where he argues, like Hippocrates and Aristotle, that geography influences physiology, intelligence, and other human attributes.

The ignorance and patent racism of Lynn’s appropriation of Galen does not, however, change the fact that this idea — that geography influences physiology — underpins modern racism and in particular modern race pseudo-science. Whether or not ancient writers thought Africans or Europeans were more intelligent is beside the point; the assumption that there are essential, meaningful differences between groups of human beings (resulting from climate or any other factor) has been debunked. Whether or not Al-Mas’udi quotes a real Galenic text, his history is transparently implicated in racist politics: he makes explicit reference in the passage being discussed to the “Zanj” people, who were African slaves under Islamic rule and whose revolt against that rule Al-Mas’udi discusses in his work. Al-Mas’udi’s insistence on the intellectual inferiority of Africans should be seen as a contribution to perpetuating that slavery, just as such claims were used by Europeans and Americans to justify slavery in the 18th century. It is chilling to note the similarity between the description of Africans that Al-Mas’udi attributes to Galen and the harmful racial stereotypes that persist to this day: “kinky hair, thin eyebrows, broad noses, thick lips, sharp teeth, malodorous skin, dark pupils, clefty hands and feet, elongated penises, and excessive merriment.”  These physical stereotypes were popularized by blackface minstrelsy, which made these physical characteristics evidence for the moral and cultural inferiority of African Americans.

Traditional admiration for Aristotle, Hippocrates, and other ancient writers has served as the basis for many forms of hatred and oppression. The same may be said for Al-Mas’udi, whose already significant influence has, at times, been further augmented by a Classical parallel by which he is sometimes called “The Herodotus of the Arabs.” According to the scholar Akbar Muhammad, however, one of Al-Mas’udi’s successors, Ibn-Khaldun (14th century), “reprimands al-Mas’udi for apparently accepting Galen’s conclusion that ‘the levity, excitability, and emotionalism’ of [Africans] were caused by their alleged weakness of mind;” Ibn-Khaldun called Galen’s claim “an inconclusive and unproven statement.” We would do well to imitate this skepticism.

If you recognize the passage in Galen that Al-Mas’udi is quoting, we’d love to hear from you at pharosclassics@vassar.edu or on social media.

Lynn’s article is reprinted on the NPI site (without attribution) from a volume of essays entitled Race and the American Prospect, which claims to “puncture several ‘politically correct’—but scientifically false, and socially suicidal—myths about race.” Reviews cited on its back cover praise it for “point[ing] out the rareness of successful multiracial or even biracial societies and show[ing] how the pursuit of this ideal in the U.S. has brought the increasing self-degradation of the majority white population.” Contributors include prominent white supremacists such as Jared Taylor, whose site Pharos has documented, and it was published by the same organization as the white nationalist magazine The Occidental Quarterly, whose editor, Kevin MacDonald, is cited with approval in a homophobic article we described. The book begins with an epigraph taken from the Roman poet Horace’s Epistles (1.10.24): “Though you drive out nature with a pitch-fork, still she will ever return.” This line seems to have been chosen to support contributors’ fundamental belief that racial differences are in some sense natural and that attempts to say otherwise simply deny an unavoidable reality. Like Lynn’s appropriation of Galen, it also serves to imply that the racist ideas in the book are simply restatements of ancient, and, in their view, therefore unquestionable, views of human nature.

We consulted the following scholarship in preparing this post:

Ibn Khaldun, The Muqaddimah: An Introduction to History, translated by Franz Rosenthal. Ibn Khaldun’s rejection of Al-Mas’udi’s citation of Galen appears at the end of the “Fourth Prefatory Discussion: The Influence of Climate Upon Human Character.”

Kennedy, Rebecca et al., Race and Ethnicity in the Classical World: An Anthology of Primary Sources in Translation (2013).

Muhamad, Akbar, “The Image of Africans in Arabic Literature,” in Slaves and Slavery in Muslim Africa. volume one: Islam and the Ideology of Enslavement, edited by John Ralph Willis (1985). This essay may be the origin of the translation of Al Mas’udi’s reference to Galen that appears widely online. Two earlier discussions (Bernard Lewis’ Race and Color in Islam (1972) and Giovanni Vantini’s Oriental Sources Concerning Nubia (1975)) provide different translations. Neither indicates what passage, if any, in Galen Al-Mas’udi is quoting.

As no complete English translation exists of Al-Mas’udi’s work, we have relied on the French translation of de Meynard and de Courteille, as revised by Charles Pellat and published as Les Prairies d’Or (1962).

We have linked to an archived version of NPI’s article to avoid generating traffic to their site. The original article may be viewed here.

Update: when Pharos originally published this article the NPI had lost its tax-exempt status. On October 4th, 2018, the group regained that status.