From the Director:
This is an updated version of an article that I wrote for Pharos in 2018. As pointed out by Professor Shelley Haley in a lecture at Durham University, the original relied on and promoted anti-Black scholarship on Cleopatra and accepted white supremacist concepts of race. As Prof. Haley noted, my discussion of race was much less well-informed than my discussion of misogyny, as is frequently the case with white feminists. This ignorance made it easy for unquestioned white supremacist perspectives derived from my acculturation as a white person and from my training as a Classical Scholar to lead me to lend academic respectability to anti-Blackness. The original post is available here as an illustration of what that complicity looks like. I would like to thank Professor Haley for applying her expertise, time, and energy to Pharos and to acknowledge the harm the original article has done.
-Curtis Dozier, Director of Pharos

Michael Sebastian is a misogyinst blogger whose site, Honor and Daring, features articles such as “How to turn your wife from a feminist into a traditional woman.” He has also contributed articles to the misogynist site Return of Kings, such as “Why are so many women sluts?” in which he complains about contraception and Hollywood’s “Pro-Slut Agenda.” Another of his pieces on this site, “Powerful men who were undone by weakness”, presents “the lives of great, or nearly great, men who failed so that we can avoid making the same mistakes.” His examples include the ancient Roman statesmen Cicero and Mark Antony, for whom “failure” turns out to mean sharing power with a woman. It reads like little more than a clichéd interpretation of history until it turns to white supremacy and neo-Fascism. 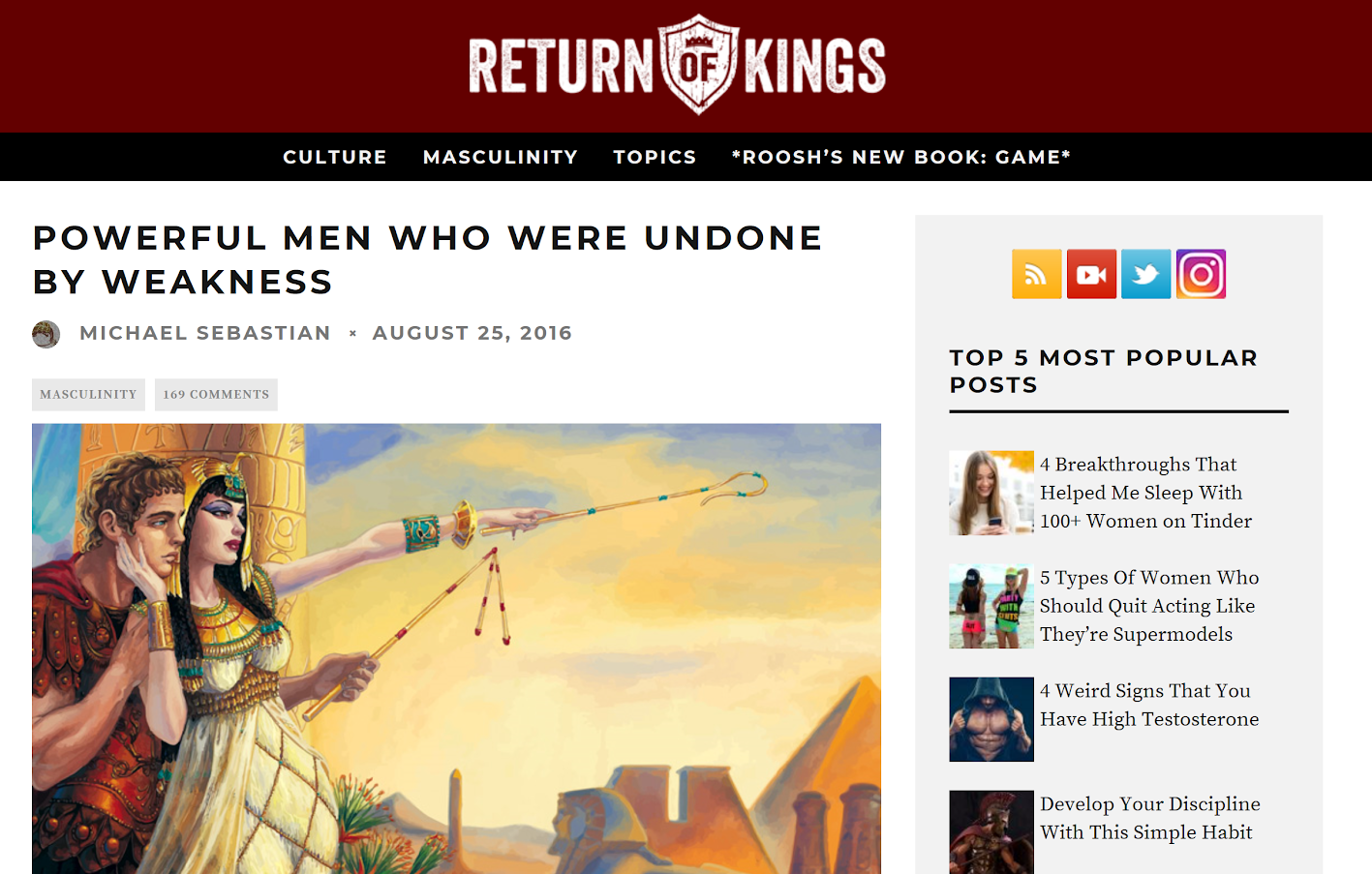 Sebastian’s treatment of Mark Antony displays his hateful politics most clearly. Mark Antony was one of Julius Caesar‘s most trusted generals in his campaigns in Gaul and his representative in Rome in the lead-up to Caesar’s civil war with Pompey. After Caesar’s assassination Antony and Octavian, Caesar’s adopted son (and the future emperor Augustus), came into conflict over control of the Roman world. Antony consolidated his power in the east by entering into a love affair with the Egyptian ruler Cleopatra, who was also probably keen to preserve her kingdom in politically tumultuous times. In their eventual civil war with Octavian, Antony and Cleopatra were defeated at the Battle of Actium and committed suicide rather than be captured.

Sebastian’s explanation for Antony’s “failure” is that he “let the woman he loved dominate him completely even to the point where he did stupid things that destroyed both of them.” In saying this Sebastian joins the long misogynist tradition of labeling women dangerous seductresses who corrupt masculine virtue. Indeed, there is a long tradition of vilifying Cleopatra in precisely this way, as Stacy Schiff’s biography of Cleopatra makes clear. He may be the first, however, to translate this interpretation of Cleopatra into the terminology of the “Red Pill” movement by saying that Antony “committed suicide in true omega fashion.” Misogynists strive to be “Alpha” men, not “Betas;” the former dominate women, the latter are enslaved to them, and “Omega” (the last letter of the Greek alphabet) designates what these men consider the worst enslavement one can suffer. They present “alphas,” “betas,” and “omegas” as a “natural,” evolutionarily-determined hierarchy. Never mind that human society doesn’t actually look all that much like the animal hierarchies these men base their philosophy on, or that for all its pseudo-scientific trappings the idea had never really been applied to human behavior until the misogynists got their hands on it.

Sebastian’s treatment of Cleopatra is rife with misogynist stereotypes of the “sinister seductress.” References to women’s mercenary use of “charms” and their political ruthlessness are commonplace on Return of Kings and other misogynist sites. But a further remark, hidden in the caption to one of the article’s photographs, reminds us that, for misogynists like Sebastian, Cleopatra is more than a touchstone of the danger of empowered women. They also want to use her to preserve their fantasy of a homogeneously “white” Classical history. And they can only do this by using modern racist categories to erase her well-attested ethnic identity.

Alongside his discussion of Cleopatra, Sebastian includes a photograph of the Greek actress Ada Livitsanou with the caption “Cleopatra wasn’t an Egyptian. She was a Greek, like this girl.” Livitsanou is a surprising choice both because she has never played Cleopatra (plenty of white actresses have) and because her most famous role as a man who is transformed into a woman puts her at odds with the politics of an openly transphobic site. But it’s equally odd to say so definitively that Cleopatra was Greek. She was the first of the Ptolemaic rulers to learn and speak Egyptian. She described herself as Pharaoh in an inscription commemorating her first official act, which involved Egyptian cult practice. And she commissioned many sculptures of herself in the Egyptian style. Clearly Cleopatra thought of herself as Egyptian, even if scholars have tended to assume that her identification with Egypt was a political bid to consolidate her power over her Egyptian subjects and that Hellenizing representations of her reflect her authentic identity (Why not assume the opposite, that she adopted Roman styles of representation in order to survive in a world dominated by Rome?). But Sebastian isn’t really arguing about how Cleopatra saw herself. Because when he says that she was Greek, not Egyptian, what he means is that she was white.

More is at stake than a confusion between race (“Cleopatra was white”) and ethnicity (“Cleopatra was Egyptian”) that tends to make artificial racial categories seem natural and unchanging. We can assume Sebastian is conflating the two because other white supremacists frequently do it much more explicitly. William Pierce, perhaps the most influential American white supremacist of the late 20th century, wrote an essay in 1986 about Cleopatra called “The Fraud of Black History.” Thirty years later The Daily Stormer wrote “Cleopatra wasn’t black: it seems we need to keep saying it.” In both cases, and in many in between, their argument is that because her great-great-great-great-great-great grandfather was Alexander’s general Ptolemy she was Greek and therefore “white.” But to make claims about Cleopatra’s racial identity is to ignore her personal identification as an Egyptian Pharaoh and impose upon her a set of categories invented by white people 1,800 years after she lived to justify the enslavement of Africans.

Calling Cleopatra, or any ancient person, “white” is a way to erase that history, as if such racialized categories are natural and ever-present, despite the fact that the boundaries of these categories have shifted many times as the ideological needs of the dominant group of “white” people required. Turning to Cleopatra’s ancestry to answer this question, as both white supremacists and much more mainstream commentators and scholars do, is to accept the historical reality of white supremacist categories and smacks of the measurement of proportions of ancestral blood in order to delineate racial groups, a practice most familiar in the racist “One Drop Rule” that some US States codified in law in the early part of the 20th century and that continues to exert its pernicious influence.

Sebastian can’t resist racializing Cleopatra because white supremacists feel a need to police her supposed racial identity to prevent a figure so famous among the general public from destabilizing our certainty about the arbitrary racial categories that underpin ideas of white superiority. It’s a prime example of why white supremacy and misogyny often go together: both depend on the belief that hatred is justified by the supposed inferiority of the “other.”

The other two “great men” in the article are Cicero and the 2012 Republican presidential candidate Mitt Romney. There isn’t anything overtly hateful in Sebastian’s analysis of Romney’s “weakness” in his televised debates with Barak Obama. He just wishes Romney had won in 2012. But there is a darker side to his analysis of Cicero, who, he says, amid “chaos within the Republic… was like the ‘true conservatives’ of today who stubbornly hold erroneous ideas that undermine there [sic] own opportunity to assume power” and who “didn’t know when to quit.” Sebastian is referring to Cicero’s repeated political attacks on (that Omega) Antony in his Philippics, which did in fact lead to Antony having Cicero killed. Sebastian apparently believes that if Cicero had been stronger, he would have recognized that “the only hope for an effective government to restore order was a dictatorship,” that if he had been a true alpha Cicero would have known that “there is a time and a place for criticism and there is a time for keeping one’s mouth shut” and would not have opposed Antony’s (or Octavian’s) efforts to replace republican government with monarchy. This complacency about totalitarian rule sounds disturbingly like the views articulated by neo-fascists who regard the autocratic rule of Octavian as desirable. One site that Pharos has documented, for example, argues that “Democracy has failed in this once great nation, now the time for a new Caesar to revive the American spirit has dawned.”

It’s moments like this that make clear the true aims of the misogynists on sites like Return of Kings. They say they’re just trying to pick up women, but what they really want is to erase the progressive, democratic values that threaten their hateful and regressive vision of how the world should be.

Even though Return of Kings has stopped publishing new content because their advertising revenue has dropped so much, we have linked above to archived versions of their articles to avoid generating traffic for them. The original article may be viewed here.