Return of Kings is a misogynistic site that Pharos has previously documented. Before it announced it would no longer publish new content due to falling site revenue, it published an article entitled “Alpha Fux Beta Bux Even Held True in the Times of Ancient Greece” arguing that the story from Greek mythology of Aphrodite’s affair with Ares is an “allegory for red pill concepts” that sites like Return of Kings claim reveal the (always misogynist) “truths” about women. Identifying such allegories in ancient material is worthwhile, according to the post, because they provide one of the “best guards” against the modern “assault on manhood perpetuated by feminized elites.” 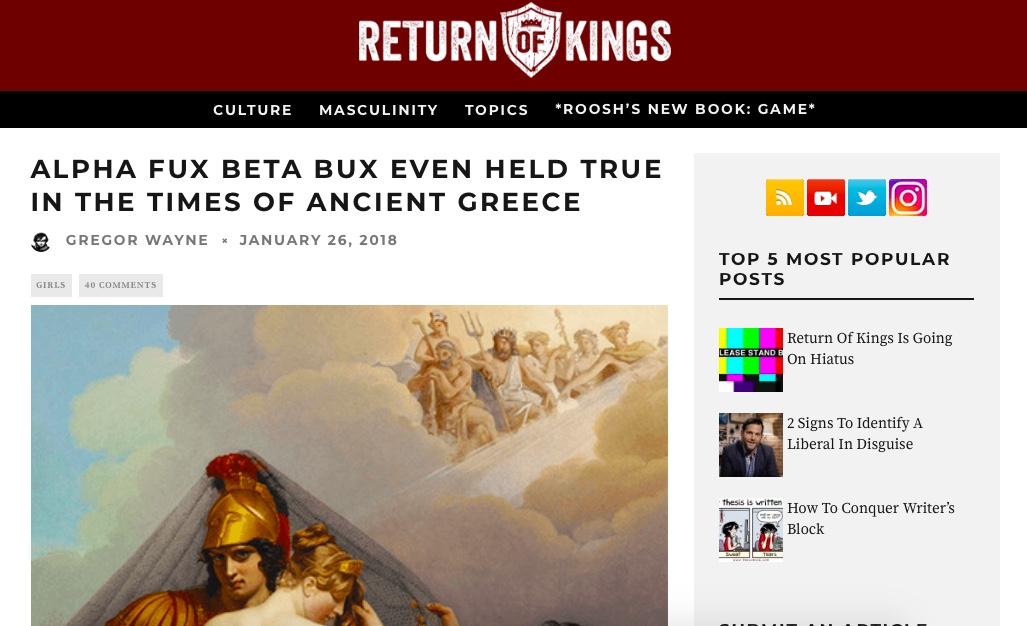 The story in question appears first in Homer’s Odyssey and was retold many times. Aphrodite, the goddess of love, was married to Hephaestus, the god of technology and the forge, but had an affair with the god of war, Ares. This story, the post claims, illustrates the concept of “Alpha Fux Beta Bux,” which misogynists use to argue that women are prone to sexual infidelity because of their deceitful and selfish nature. They insist that women prefer to marry lower-status men that they do not respect (“betas”) as long as they can provide financial stability (“bux”), but are sexually attracted (“fux”) to higher-status, “dominant” men (“alphas”). To a sexually frustrated man, such facile and hateful arguments about women are preferable to recognizing that, historically speaking, male-dominated societies forced women to attach themselves to such men because they had limited avenues to become self-sufficient.

The author of the post interprets Hephaestus as an archetype of the “beta” because his only means of “keeping [Aphrodite] interested” was “buil[ding] her a spectacular wedding house.” He compares Hephaestus to a “nice and faithful Christian” friend of his who was “turned down” by “a lot” of women but who “did everything” for a woman (who was “a seven at best“) because he “hop[ed] to one day marry her and have a family.” This woman, according to the post, treated him “with condescending amusement” and “dat[ed] other guys on the side.” He compares Ares to his other friend with a “devil-may-care attitude and dominant personality,” who “drank like a motherfucker,” and “enjoyed acting like an asshole at times,” but who, according to the post, “not surprisingly, acquired a harem.”

The concept of “Alpha Fux Beta Bux” perpetuates the misogynist notion that female sexuality needs to be controlled by men, and provides a convenient justification for men like the author’s friend “acting like an asshole” toward women. The post attempts to give legitimacy to this vision of women by claiming that ancient Greek culture already “under[stood] sex dynamics and [wove] narratives to preserve this knowledge” and to “teach valuable truths.” These kinds of claims about “truth” and “knowledge” are intended to disguise the site’s virulently misogynist view of women, which Dr. Donna Zuckerberg has summarized in an interview about her book on Classics and misogyny online: “that all women are deceitful and degenerate; that white men are by nature more rational than (and therefore superior to) everyone else; that women’s sexual boundaries exist to be manipulated and crossed; and, finally, that society as a whole would benefit if men were given the responsibility for making all decisions for women, particularly over their sexual and reproductive choices.”

It’s true enough that Greek mythology provides a wealth of misogynist material. But this is because these stories were one of the means by which ancient patriarchal culture attempted to justify the oppression and silencing of women. Let’s not accept them as “guidance for men” but, as Pharos has argued in the past, use these site’s appropriations of Greco-Roman antiquity to expose their claim to be defending “civilization,” upholding traditional values, or, in this case, providing a “guard” against the “assault on manhood,” for what it is: self-serving nostalgia for a time when men like them could just assume that women existed only to provide pleasure to them. “When you’re accustomed to privilege, equality feels like discrimination.”

To avoid giving Return of Kings traffic we have linked to archived images of the site. A link to the site itself can be found here.