Eurocanadian.ca is a white nationalist site devoted to the “promotion and defense of the ethnic interests of European Canadians.” Pharos previously documented a review on this site of a book arguing that ancient Greek homosexuality is “a myth”, but the site also contains original content about antiquity, such as a ranking of  seventy-five of the “greatest” philosophers entitled “Greatest Philosophers are ALL European Men.” It’s a textbook example of confirmation bias: the author presents the list as a scholarly assessment but is really only interested in “proving” the intellectual and racial superiority of Europeans. 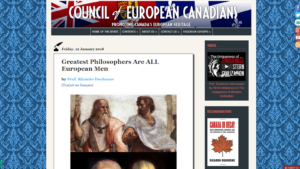 The list was compiled by Eurocanadian.ca’s primary contributor, Ricardo Duchesne, who is also a professor of Social Science at the University of New Brunswick, Saint John in Canada and the author of a book entitled Canada in Decay: Mass-Immigration, Diversity, and the Ethnocide of Euro-Canadians.

Twenty percent of the names on Duchesne’s list come from Greco-Roman antiquity. The list is alphabetical, not ranked, but the images of “Aristotle and Plato, Kant and Hegel” at the top of the article convey Duchesne’s top four, and the image of a bust of Aristotle with the caption “The greatest?” suggests that Aristotle, for him, tops this list. One reason that Duchesne gives so much space to ancient Greek thinkers is to give his list intellectual credibility. Another is to claim, as white nationalists routinely do, a false and simplistic cultural and racial continuity between themselves and the ancient Greeks. All of this will be familiar to readers of Pharos, which has documented hate sites using Duchesne’s favorite philosophers in support of white nationalism, totalitarianism, and misogyny.

Despite the historical sweep of his list Duchesne clearly believes that ancient Greek philosophers provide the primary evidence for the superiority of the tradition that Duchesne labels “European” (never mind that several of the ancient philosophers on his list were born outside of what ancient Greeks considered “Europe”). He claims that the “ancient Greeks singularly discovered the faculty of reasoning” while “Chinese philosophy never rose beyond [a] pre-rational, mystical, poetical, bureaucratic, style of writing.” Taoists “are not even at the level of the pre-Socratic search for ultimate causes” and compared to Parmenides “lack rigour” and “describe [the Tao] in hazy words, asserting that it is, but not deducing it.” Duchesne calls it “a stretch” to claim, as one scholar does, that “the paradoxes of the [Chinese] Mohist Hui Shih are similar to the paradoxes of Zeno” because Zeno’s are “deeper philosophically.” Kant is the only philosopher not from ancient Greece that he invokes to argue for the inferiority of other traditions, which makes sense because Kant was a racist who rewrote the history of philosophy in a way that suppressed the value of non European contributions.

Such lists are, hwoever, only as good as the scholarship and assumptions that underlie them. About his research methods, he writes, “I was going to consult encyclopedias and dictionaries of philosophers, but these are too comprehensive in their inclusion of numerous secondary figures, so I decided to rely on my own judgement and my own library of books.” That is, by avoiding scholarship that included non-European philosophers Duchesne was able to produce a list made up almost entirely of Europeans. And if Duchese feels that non-European philosophers aren’t “great” it is likely because his concept of what constitutes “greatness” or even “philosophy” is prejudiced against them: indeed he writes that “it was Aristotle who did the most in ancient times to delineate what constitutes a proper philosophical statement.” He then ranks Aristotle at the top of his list, which should thus be considered a list of the most Aristotelian philosophers, not the greatest. It is obvious that Duchesne approached the task of making the list with the result he wanted already in mind.

The result he wanted was a list that he could use to support his hateful politics, which are obvious throughout his discussion. In an article that is supposedly about rational thought, Duchesne instead focuses entirely on race, a category with no basis in genetics or biology: “the ethnicity of the greatest philosophers,” he writes, “may be a most revealing factum. He explains the exclusion of scientists from his list with reference to the influential race pseudo-scientist Charles Murray, who has “already calculated that 97% of the greatest scientists were European.” He goes out of his way to specify that although Augustine was African, he was “white,” even though the color of Augustine’s skin was the least significant of his identities in the time he lived in. His inclusion of Jewish philosophers only “insofar as they were educated in Europe” signals his racial anti-semitism.

Duchesne writes off entire philosophical systems with blanket statements like “one could seriously argue that China did not produce one single great philosopher” and “aside from the Muslim and Chinese world…NO other culture in the world, produced any great philosopher.” But this evaluation is merely the result of his prejudice. Plenty of non-European thinkers have made significant contributions to human thought. The modern world requires a more global approach to what constitutes knowledge. The very idea of a distinction between “western” or “European” philosophy and the rest of the world is historically ignorant and geographically inaccurate. And finally, the discipline of Philosophy has for centuries defined itself in ways that exclude or mute the contributions of non-European thinkers.

Duchesne would like to keep it that way. “Students across the West,” he complains, “are being taught that non-Europeans are just as prominent [as Europeans] in their philosophical contributions.” He attacks such “Multiculturalism” as “inherently an ideology that suppresses the highest achievements in the planet, levels down Western culture in the name of equality.” The result of this, he claims, is a kind of academic version of the racist canard of white genocide (or as Duchesne puts it in the subtitle of one of his books: “the ethnocide of Euro-Canadians”):  “The last remaining White male philosophy professors are being substituted by half baked ‘global thinkers’ from diverse cultures.”

Duchesne is a professor at a university. He has publications on Research Gate. He writes about famous philosophers like Marx and Hegel, using lofty language like “post-Kantian idealism” and subtle-seeming comparisons of “pre-Socratic philosophers” and Chinese thought. But all he’s done is use his education, his prestige, and his resources to support his hateful world view.

To avoid giving Eurocanadian.ca traffic, we have linked to an archived version above. The original article can be found here.