“Warrior XII” sells t-shirts and other apparel that “embrac[e] the warrior mindset and the essence of what it means to stand on the thin blue line, serve in our military, or simply be a patriotic American.” The “12” of “Warrior XII” is a slang term for police. Their designs include slogans such as “I’ll control my guns, you control your kids”; “If you can’t be safe, be deadly”; and “Die a Hero, or live long enough to become the villain.” Warrior XII also sells several shirts that invoke classical antiquity, including designs such as “Spartan Helmet,”  “American Spartan,” and “SPQR.” As Pharos has documented, both the Spartans and SPQR are favorite sources of inspiration for white nationalists, and on closer inspection what might at first seem to be nothing more than a line of shirts for gun enthusiasts turns out to be a platform for xenophobia and coded white supremacy.

Pharos has documented hateful merchandise before, with an article on classicizing shirts and coffee mugs produced by a supporter of President Trump. But whereas the violent misogyny of those products was obvious, Warrior XII employs “coded” references to racism and xenophobia that are intelligible to racists but allow the brand to protect itself from accusations of hate speech.

The “American Spartan” shirt features the closing line of a poem by Michael Marks that describes a military sniper in an unspecified “desert” killing a suicide bomber before he was able to detonate a bomb in a crowded street. The poem ends with the sniper telling a reporter to tell “folks back home about the good we’ve done” in protecting people from violence in war-torn countries and fighting tyranny. The shirt picks up there: “And maybe just remind the few if ill of us they speak, that we are all that stands between the monsters and the weak.” The poem makes no reference to Sparta but its conceit of taking home a message about the “warriors” echoes the ancient epigram that commemorated the Spartans that died at Thermopylae. In that poem Simonides asks whoever reads the poem to “announce to the Spartans” that the soldiers carried out their orders.

On its own, a shirt like this does not rise to the level of something that Pharos would ordinarily document. It reads like a simple piece of pro-military propaganda, like the several other shirts that Warrior XII sells with the slogan MOLON LABE (a favorite phrase for advocates of unrestricted gun ownership). But Warrior XII also sells a “Thin Blue Line Law Enforcement Edition” of the “American Spartan Shirt” which is identical to the “Classic” version except that a stripe on the American flag is blue. This shirt, with the same poem, makes police officers, not US Military personnel abroad, “all that stand between the monsters and the weak.” The “monsters” in the original shirt were terrorists bent on killing innocent civilians. But who are the “monsters” in the law enforcement version of the shirt? The black and Latino people that American police disproportionately target. Warrior XII’s celebration of firearms and glorification of violence in connection with law enforcement is particularly disturbing given that United States law enforcement officers kill more people than any other country’s police and that most of the people they kill are people of color.

Other shirts on the site intersect with the symbols and cultural narratives of white supremacy. The “SPQR” shirt is part of the site’s “Legendary Warriors” series and “represents the icon for one of the strongest and most lethal forces to ever walk the earth.” The SPQR logo, however, is also a favorite symbol of white nationalists.

Not all of Warrior XII’s shirts engage classical antiquity, but several others in the “legendary warriors” line engage elements of history that white supremacists admire. The “American Viking” shirt with the slogan “Victory or Valhalla” is intended, according to the site, as a “tribute to fearless American warriors who know that it is better to die with honor in battle than to live in shame as a coward,” but the Vikings are also a favorite touchstone of white supremacist groups. The man who killed William Lewis Corporon, Reat Griffin Underwood, and Terri LaManno at a Jewish Community Center in Kansas wrote that “Valhalla does not accept Negroes. There’s a sign over the pearly gates there which reads, ‘Whites only.’” 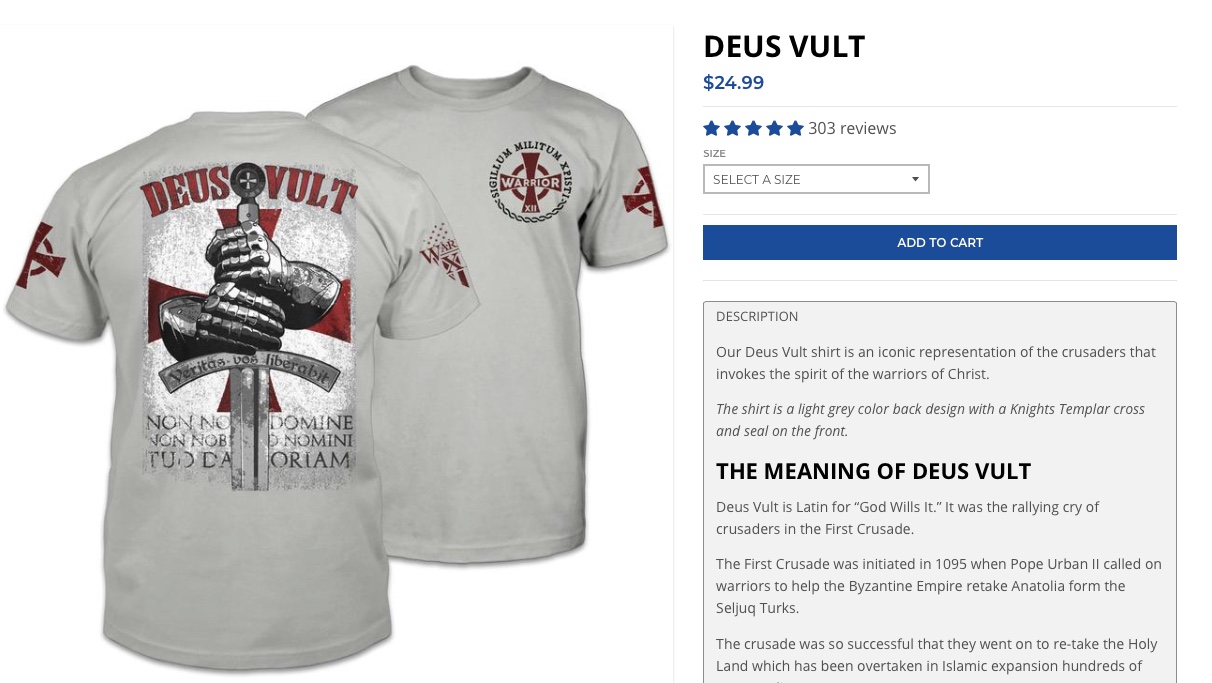 Several shirts on the site also promote xenophobia through references to the Crusades, such as “The Crusader,” which shows a stereotyped image of a Knight Templar in front of an American flag with a quote from the Psalms (also available in a “Thin Blue Line” edition); there is also an “American Crusader” shirt with a different scene and a “Texas Crusader” shirt with the Texas flag. But the xenophobia of these shirts is most apparent in the “Deus Vult” shirt. This is emblazoned with several Latin mottoes associated with the Crusades, including Deus Vult, “God Wills It,” the supposed battle cry of the crusaders. The Crusades themselves, and this phrase in particular, are frequently invoked by xenophobic and islamophobic groups in order to create a false analogy between the military expansion of Islamic states in the Medieval Period and the contemporary refugee crisis. The site also features a full line of anti-immigration shirts, including one with the slogan “Warning: Entering the United States illegally may cause separation anxiety,” a callous endorsement of the Trump administration’s inhumane policy of separating immigrant children from their families, a policy that has continued despite a court order ending it.

Warrior XII’s designs most leave their hateful politics implicit, but on social media they are more obvious. Paging through Warrior XII’s Facebook feed we found misogyny: 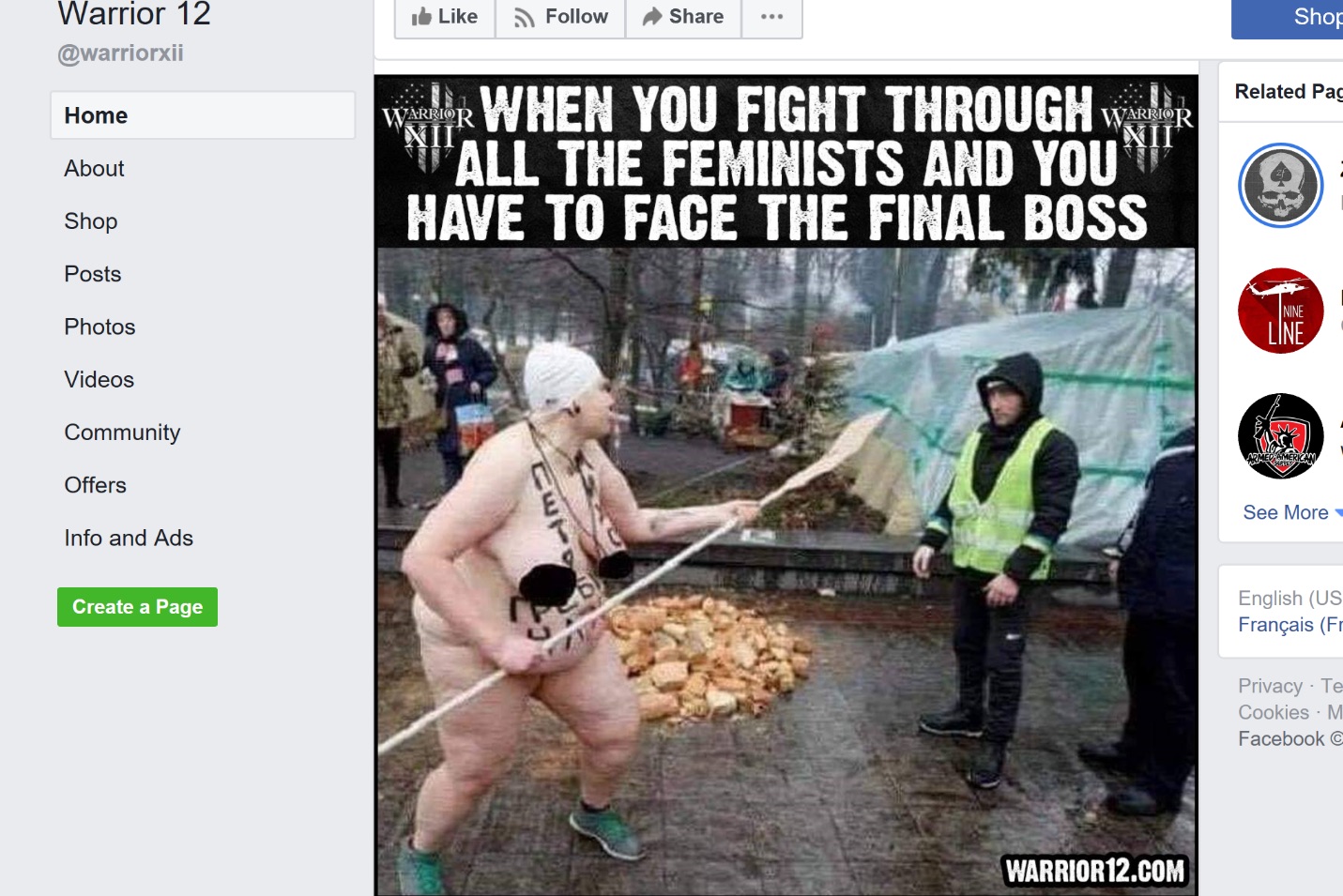 And we found several posts that describe immigrants coming to the United States as “invaders” and “attackers”: 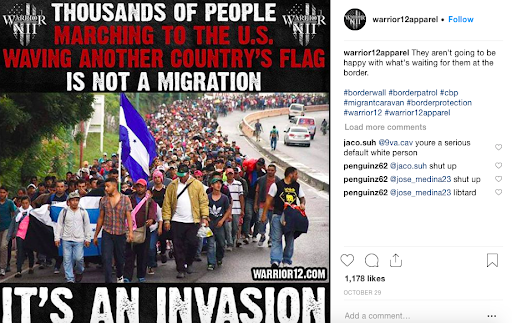 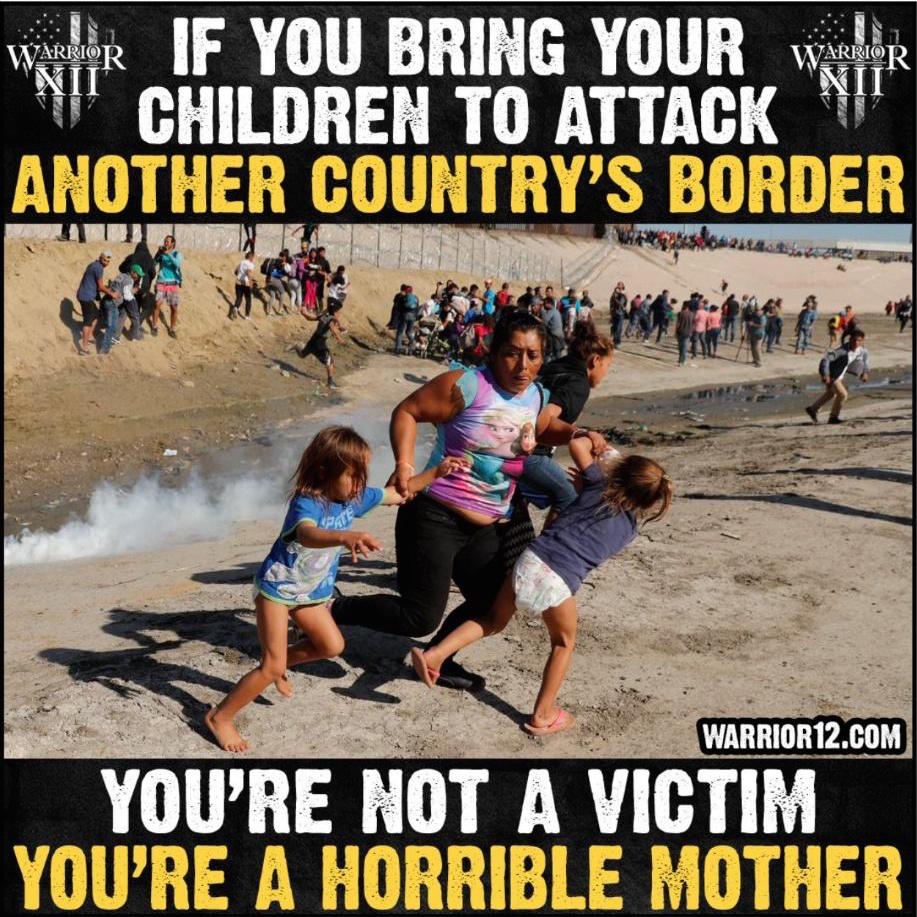 Equating immigration with an “attack” and immigrants with “invaders” is the same language commonly found on xenophobic hate sites, which often assert a similarity between modern immigrants and the so-called “barbarians” who supposedly caused the fall of the Roman Empire. It’s also the language used by the man who killed eleven people in a Pittsburgh synogogue on October 27, 2018.

These posts don’t make a connection to classical antiquity, but one about (now former) United States Secretary of Defense James Mattis’s decision to send military personnel to the US-Mexico border does. 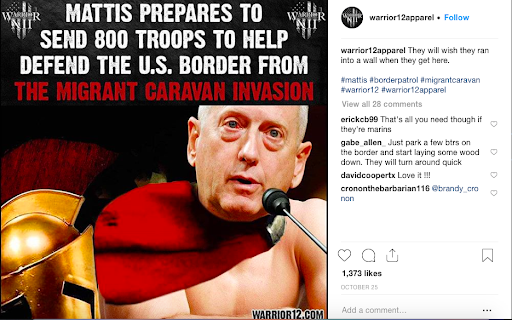 This image justifies the deployment of military force against unarmed, impoverished immigrants by calling them “invaders” and endorses it by representing Mattis as an ancient Spartan soldier, such as those that many hate groups admire.

Other posts on social media are less obviously hateful but nevertheless demonstrate Warrior XII’s attempts to attach the prestige of classical antiquity to its brand, such as this quote wrongly attributed to Alexander III of Macedon, who is also a favorite historical figure of white supremacists that Pharos has documented. 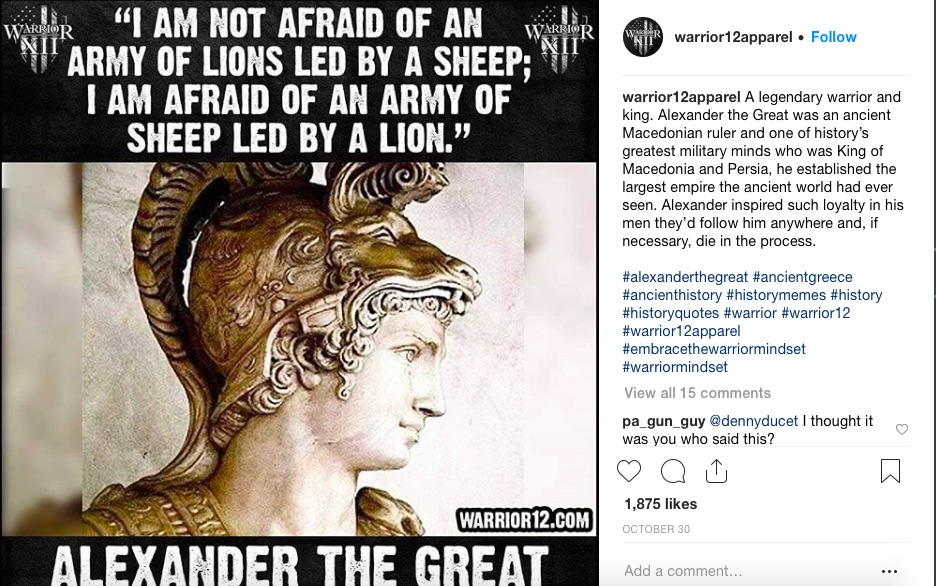 Warrior XII says the site was “founded during a time when the nation seemed to turn against law enforcement” and touts itself as a strong supporter of law enforcement, “put[ting] a lot of time and money into organizations that give back such as Blue Lives Matter and Back the Blue 5K.” Even this is a coded invitation to hatred: “Blue Lives Matter” is a racist movement that hinders, rather than helps, progress toward criminal justice reform by attempting to deny the fundamental injustice of the way policing is currently conducted in the United States. A brand like Warrior XII — one that celebrates violence, promotes racism and xenophobia toward those that law enforcement are commonly assumed to be protecting, and, perhaps most dispicably of all, profits from those who either endorse these views or buy their products without being aware of their associations — isn’t the kind of support our police officers need, or should want.

Warrior XII makes money by selling their hateful merchandise. To avoid generating traffic for their site we’ve linked above to archived images of their site.