Cato the Elder was a Roman senator who is usually remembered as the preeminent advocate for traditional values in ancient Rome. He is best known for ending many of his speeches in the senate by saying “Furthermore, Carthage must be destroyed,” even if he had been speaking on a different topic, as a way of pressing for further military action against Carthage following that city’s defeat in the Second Punic War. Several other sayings attributed to Cato have survived, two of which are favorites in online misogynist communities such as those that Donna Zuckerberg has described in her book Not All Dead White Men: Classics and Misogyny in the Digital Age. One quoted in Plutarch’s Life of Cato criticizes Romans for their supposed subservience to women: “All mankind rules its women, and we rule all mankind, but our women rule us.” In another, quoted from Livy’s history of Rome, Cato calls woman “a violent and uncontrolled animal.” 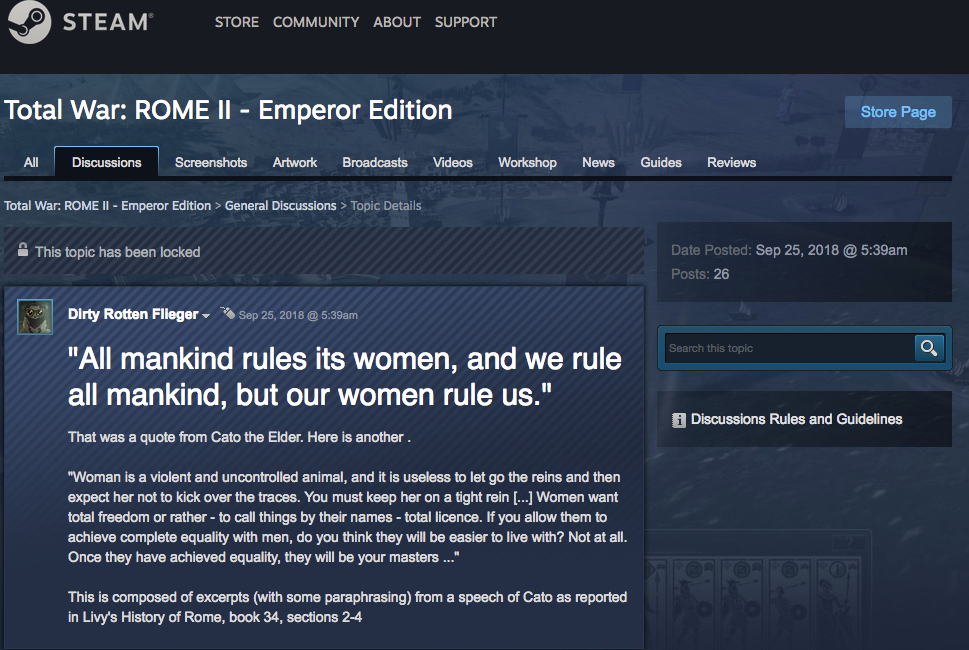 Both quotes were posted in an online forum for discussing the military strategy video game “Total War: Rome II” amid a coordinated effort by misogynist gamers to damage the reputation of the game because, they claimed, updates to the game had increased the frequency with which armies were led by female generals. Many players demanded that “historical accuracy” be observed in the game. Given that the existence of female generals in antiquity is well-documented and that, as a representative of the game developer pointed out, it is possible for users to modify (“mod”) the game so that there are no female generals (indeed modding is a favorite tool hate groups), calls for “accuracy” are transparently a cover for misogyny. The user who posted Cato’s complaint that “all mankind rules its women, and we rule all mankind, but our women rule us” wanted an ancient Roman quote that would make his view that women should not occupy positions of power seem like a “historically accurate” one. He was apparently unaware that Plutarch notes that Cato was parapharasing the Greek general Themistocles when he said this, and that Themistocles, according to Plutarch, originally said it “jestingly” concerning his wife’s relationship with his son.

Other participants in the forum make clear that it is misogyny, not historical accuracy or precedent, that lies behind the invocation of Cato. One of the first commenters responded with nothing more than a Snoop Dogg lyric “bitches ain’t shit but hoes and tricks” (the original poster later marked this “the answer to their question”). Another described examples of women generals from antiquity as “females thrust into positions of power that most of them could not handle and they were beaten by the Roman Patriarchy.” This is hatred of women, not concern for history. Any appreciation for Greco-Roman antiquity worthy of the name will recognize that we should strive to move beyond the failings of the past rather than laboring to emulate everything that’s been left to us. At least one of the commenters in this forum understood this, pointing out the “general unpleasantness” of Cato, who “also wrote a [treatise] about how to properly exploit slaves to increase agricultural output.” This commenter also puts his or her finger on the contradiction at the core of the original poster’s use of Cato: “Isn’t the fact [Cato] worried about it proof enough that women did indeed play a political role?”

No such variety of viewpoints can be found in a series of Reddit threads within the misogynist “Men Going Their Own Way” (MGTOW) community. These threads have titles like “Cato the Elder Knew What’s Up 2000 Years Ago (Regarding Women and Equality)”, “Knowledge from our Betters”, and, simply, “A Quote by the Roman Senator Cato the Elder”. All of these invoke the second quote from the video games forum, a basically accurate paraphrase of a speech reported by the Roman historian Livy in which Cato calls woman “a violent and uncontrolled animal” that needs a “tight rein” and warns his audience that “if you allow them to achieve complete equality with men…they will be your masters.” According to Livy, Cato’s speech was given for a specific political purpose, to support the Oppian Law, which barred women from riding in horse and carriages, wearing colored clothing, and owning more than half an ounce of gold. However, the commenters in the MGTOW reddit threads understand it in a much more general way, as support for all aspects of their hateful attitudes toward women: that women are ruled by base, irrational desires, that they are dangerous and need to be controlled, and that as things stand they have too much, undeserved, power over men.

Here is a sampling of the ways that commenters found agreement between Cato’s misogyny and theirs:

As Donna Zuckerberg has argued, misogynists online see themselves as heirs to prestigious ancient thinkers who articulated misogynist views. Accordingly many commenters add additional ancient evidence that they believe gives legitimacy to their hatred of women.

Given that misogyny has been described as “a gateway into the white supremacist world” that is itself deeply misogynist, it is unsurprising to find racism and anti-Semitism appearing in these reddit threads as well.

Like the gamers who don’t want to see women in their hyper-masculine fantasy of ancient Rome, the “Men Going Their Own Way” use Cato in the service of a perverted and hateful version of “historical accuracy,” even if they don’t use that term. They believe, as one user puts it, that “if over the span of thousands of years philosophers and intelligent men came to the same conclusion about women, then you better bet your ass there is a reason behind it.” It’s an argument that Pharos has documented before about misogyny in particular, and that forms the foundation of so many of the arguments that hate groups make about antiquity in support of their politics. Maybe it’s time to stop celebrating Cato as one of the “great men” of history and to see him for what he was: an influential and powerful person, yes, but one who used that power to perpetuate oppressive and self-serving politics so effectively that he continues to be used in that way today.

We have linked above to archived versions of the forums being discussed to ensure that the material we’ve documented is preserved. Those wishing to visit the forums themselves may do so at the following links: