Thanks especially to the work of Sarah Bond and Myke Cole, the general public is increasingly familiar with white supremacists’ fetishization of Classical Sparta as a supposedly racially pure, hyper-masculine, hyper-militarized model for the totalitarian ethnostate they seek to bring about. Sparta is the ancient touchstone for hate groups that Pharos documents most frequently. What may surprise many people, however, is that Classical Athens, popularly understood to be the ancient world’s beacon of democracy, cultural and intellectual accomplishment, and the polar opposite of Sparta, is promoted by white supremacists as a model for emulation as well. This appropriation of Athens in support of hateful politics poses a different kind of challenge to historians than the appropriation of Sparta does. The Sparta invoked by hate groups has little in common with the way our society is currently structured, but in Athens the hate groups find a model for how our existing political system can serve the white nationalist project. 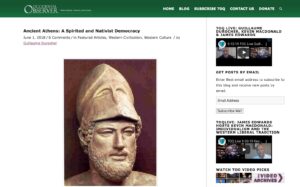 “Ancient Athens: A Spirited and Nativist Democracy” is the name of an essay on the white supremacist site The Occidental Observer by Guillaume Durocher, whose essays for both The Occidental Observer and the neo-Nazi site Counter Currents Pharos has documented before. The essay acknowledges that “the verdict of the philosophers and men of the Right has generally been harsh towards Athens” because they regard it as “a regime characterized by excessive democracy, individualism, and belly-chasing.” It’s a view that Pharos has documented on prominent white supremacist sites. But Durocher urges his readers to reconsider how the “dynamism” of Athens, and its “manly ideal of citizenship” nevertheless might serve as an inspiration to white supremacists, arguing that “Athens’ radical and unique experiment in direct democratic politics and citizenship was grounded in a strong racial identity and pride in one’s lineage”.

This turn to Athens makes sense rhetorically: the countries that white nationalists would like to claim as their own are democracies, despite some European countries falling short in various aspects and the actual erosion of democratic institutions in places like Hungary. Durocher, who elsewhere praises what he calls Hungary’s “demographic revolution”, feels that it will be easier to achieve the goal of a state ruled by and organized for the benefit of white people by transforming existing political structures than by replacing them with explicitly totalitarian ones such as those they believe existed in ancient Sparta.

Thus the undemocratic aspects of Athens’ political system are crucial to this invocation of it as a model. “We should not exaggerate the degree of individual freedom and equality at Athens,” writes Durocher. “Colonial subjects, slaves, house-bound women, and metics were deprived of political rights.” These exclusions should undermine our admiration for Athens, but white supremacists admire them. This is because, as Durocher puts it, they “guard against the gradual leveling and loss of virtue caused by excessive egalitarianism and individualism.” Athenian “Democracy”, on this view, is superior to its contemporary form, which “presents risks, in terms of cultural decline, of rejection of necessary disciplines, of failure to recognize harsh truths, let alone higher Truth” and which “seems to mean an oscillation between obesity and effeminacy.”

In keeping with the racialized politics of The Occidental Observer this essay places particular emphasis on the Athenians’ claim to be autochthonous, that is, “original” inhabitants that did not migrate from anywhere, a claim which, in Durocher’s view, indicates the centrality at Athens of “a strong racial identity and pride in one’s lineage.” He recognizes that “claims to autochthony must be considered mythical,” but his admiration for the way that “this widely-held belief underpinned Athenian citizenship and patriotism” suggests that such racialized pride was essential to the prosperity of Athens and should be emulated in the present. Durocher does not seem troubled that claims of autochthony often provide the motivation for xenophobic violence, including genocide, as when the Hutu political elite in Rwanda began urging other Hutus to murder members of another social group, the Tutsis, arguing, among other things, that the Tutsis were not originally from Rwanda. And indeed, when Durocher recommends this ideology, he joins a long line of Europeans who used nativism to their own political advantage: the very idea of autochthony as a meaningful category in Rwanda was produced by European colonizers, who invented and promoted these divisions in order to weaken resistance to colonization.

One thing cannot be denied: Durocher knows his sources. For Athenian autochthony he cites Isocrates, Euripides, and Plato. But his interpretation of these passages depends on a simplistic, uncritical reading of them. Susan Lape, whose work Durocher quotes to support his vision of Athenian politics, in fact demonstrates that racialized conceptions of citizenship in Athens do not “emerge for reasons related to a prior sense of racial superiority” but to “supply ready answers to issues the Athenians did not wish to interrogate too deeply,” especially when citizens wanted to “justify and explain why they deserved to share in…the goods of citizenship…and why others did not” (Lape, Race and Citizen Identity p.4). That is, Durocher claims that prominent Athenians talked about racial purity because it was fundamental to their city’s politics, but Lape shows it only came up when those in power were looking for reasons to exclude others. Durocher treats Athens as a model of a race-conscious democracy; it’s actually a model for how those in power use racist language to attempt to maintain that power.

The essay’s history of the Athenian Democracy is similarly tendentious, finding racialized motives and “ethnopolitical content” in “the political works of Athens’ great lawgivers and statesmen, such as Solon, Cleisthenes, and Pericles,” thus casting them as proto-ethnonationalists rather than as democratic innovators. He notes that Solon, who is often said to have “laid the foundations for Athenian democracy,” “maintain[ed] property qualifications and thus restrict[ed] certain political offices to the rich,” thus preserving political hierarchy. Solon’s poems are also praised for “condemn[ing] the nation-shattering effects of usury,” likely a dog-whistle to white supremacist readers who subscribe to anti-Semitic claims that Jewish moneylending destroys civilizations.

The description of Cleisthenes, who is known as “the father of Athenian Democracy” for reforming the constitution so that most officials were selected by the highly egalitarian method of random selection, puts a similar emphasis on aspects of those reforms congenial to white nationalists. Durocher emphasizes that Cleisthenes required that “[military] generals continued to be elected by the people, an electoral system that was said to favor the rich,” and says that his replacement of family-based tribes with geographically-based voting districts “sought to reinforce a sense of common Athenian identity.” In fact the tribal organization probably lent itself more to the kind of elitist rule that Durocher would favor than the reformed system, although there is evidence that Cleisthenes distributed the new districts to benefit his own clan.*

Durocher reserves particular praise, however, for Pericles, who “in the face of a massive wave of immigration driven by Athens’ economic prosperity…restricted citizenship to those with two Athenian parents,” a law that “not only enabled Athens to provide more benefits to her citizens but was also aimed at increasing group loyalty.” Pericles, whose bust provides the article’s header image, thus becomes an advocate for the (supposedly) racially pure ethnostates that white supremacists and xenophobes aspire to form. Durocher’s evidence for his reading of Pericles’ policies is the Funeral Oration that the Greek historian Thucydides (2.35ff.) says Pericles delivered after the first year of the Peloponnesian War. This speech, Durocher argues, “appealed to the ethnopolitical aspects of Athenian citizenship” by emphasizing “a familial, religious, communal, martial, patriotic, and even racial ideal of citizenship which gave pride of place to parents and soldiers.”

In such a “decidedly chauvinist democracy” as Athens, where “it never seems to have occurred to the Athenians to give their colonial subjects a say through a federal government,” it is only the biological descendants of citizens who can “rightly claim to have a say in politics,” because only they, not immigrants or their children, “sustain the community, especially biologically [through childbirth] and militarily.” This reading of Pericles’ funeral oration goes a long way toward explaining why the oldest neo-Nazi web forum uses the Parthenon in one of its logos, or why another white supremacist includes the text of Pericles’ speech in the “Historic Speeches and Documents” section of his website alongside other more modern speeches by famous nationalists and racists. It’s the same xenophobic argument that underlies the racist theory of a “great replacement” of “native” Europeans by immigrants.

Durocher’s appropriation of Athens in support of xenophobic and racist nationalism is disturbing, but it cannot be said to be a gross distortion of the historical realities of civic life in that city’s Classical period, when the economy depended on slavery, when women’s rights, including even the ability to appear in public, were strictly curtailed, and when foreign residents had no opportunity to enjoy the benefits of citizenship even as they were subject to military service and taxation. His analysis of Athens as a model for racist politics thus makes obvious all the ways that the popular cliché that it was “the birthplace of democracy” needs critical revision. If anything, Athens seems like an ancient study in how a narrative of equality and empowerment of the people can be used to mask an oppressive and profoundly unequal reality. Something we in 21st century America would do well to consider.

Certainly historians are well aware of the undemocratic aspects of Athenian institutions, but Athens nevertheless is often felt to embody the best of what the ancient world has to offer: to choose just one example of many, “a unique and truly revolutionary system that,” in the words of a historian quoted on a popular online history site, “… dared to give all its citizens equal political rights, regardless of their descent, wealth, social standing, education, personal qualities, and any other factors that usually determined status in a community.” The key phrase is “all its citizens.” It should be “only its citizens.” Athens offered a revolutionary and liberatory system for the few who could claim membership by birth in a group that insisted that none of its ancestors had ever come from anywhere else. This is exactly how white supremacists want to redefine the modern nation state, as an exclusive and hierarchical ethnostate defined by the imagined racial purity of its citizens. This is exactly what Durocher and others like him find in ancient Athens.

It is easy enough to reject Sparta as a model. Are we ready to reject Athens as well? Are we ready to argue that the value of studying Classical Athens lies not in connecting ourselves to the origins of democracy but in using that history to reveal critically how far our own democracy falls short of our ideals?

We have linked above to an archived version of Durocher’s article to avoid directing traffic to The Occidental Observer. The original version is here.

* “Cleisthenes was interested in breaking old associations (in which, as it happened, the Alcmaeonids [his clan] were at a disadvantage); in the new system the Alcmaeonids were well placed.” (P.J. Rhodes, note on Aristotle’s Athenian Constitution 21.4, p. 130.)