Altright.com is a website founded by white nationalist Richard Spencer that Pharos has previously documented. An article on the site entitled “The Will to Truth” argues that white Europeans should be considered superior to “the darker races” because “men of white descent” are the only ones who value the “Socratic idea of truth,” a possession that Europeans can “trace back, with justice, to our very origins in Ancient Greece.” It goes on to argue that “Should the White West perish, the love of truth perishes with it.” 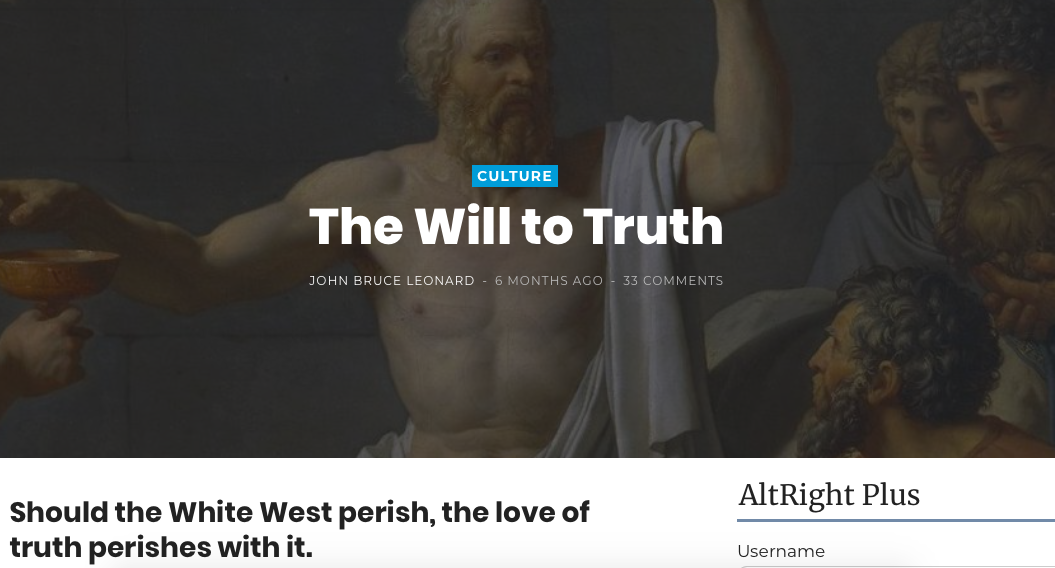 The article’s author is John Bruce Leonard, the editor in chief of the white nationalist publishing house Arktos Media. Arktos’ titles include books by Jason Reza Jorjani, whom Pharos has documented, and A Handbook for Right-Wing Youth by Julius Evola, who has been called “the leading philosopher of Europe’s neofascist movement” (Evola died in 1974).

The article’s omninous subtitle about the “love of truth” perishing with “the White west” explains Leonard’s choice of an image from Jacques-Louis David’s painting The Death of Socrates showing the ancient philosopher gesturing toward the sky with one hand while reaching for the cup of poison he had been ordered to drink. Socrates, for Leonard, embodies the pursuit of truth that Leonard believes needs defense. “The original Socratic idea of truth,” he writes, is a “quest” that “was known by the Greeks,” that “arose in no other part of the world,” and that “exists nowhere but in the White West.” “We of the West,” argues Leonard, “and we alone, are truth-tenders.”

Leonard contrasts this supposedly uniquely “white” love of truth with the attitude of “the darker races,” who, he says, “are well willing to lie on behalf of their peoples” but not to “champion the truth.” He writes off the “Arab Muslim” who, according to Leonard, cannot distinguish “‘truth’ and ‘faith’” or “‘reason’ and ‘belief.’” Nor is truth to be found, he claims, among “The Asiatics” who “have almost always given greater credence to tradition than to truth.” Finally, he comes to “the Jews,” who “prove precisely that intellect is not enough” because their “intelligence … is almost everywhere the slave of some agenda, made to serve the advocacy and defense of their people.”

Leonard’s line of reasoning exhibits similarities to those found on several other white supremacist sites. It requires the same circular reasoning as the white nationalist ranking of philosophers that we documented. He assumes that ancient Greek philosophical inquiry is superior to all others and then asserts that the existence of that form of inquiry in ancient Europe proves the superiority of Europeans. And his claim that modern white people are the direct racial and intellectual descendants of ancient Greek philosophers like Socrates resembles the frequent attempts by white nationalists to fabricate such links with the classical past.

But Leonard is not simply reproducing arguments found elsewhere. He presents his argument as an advance over the emphasis that race pseudo-scientists such as those Pharos has documented put on IQ and other (debunked) measures of intelligence. High intelligence, he says, can be found in any kind of person, but “only among Whites is IQ, or better say intelligence, tied to an idea…of the truth.” He accuses African American intellectuals like Cornel West, Eric Dyson, and Ta-Nehisi Coates of confusing “truth” with “desire,” and of believing that truth means “precisely what [they] want it to mean.” But Leonard’s examples of the lies he has in mind reveal that it is Leonard who sees only what he wants to see. He calls Black Lives Matter activists liars for claiming that “young Black men are gunned down everywhere by bigoted policemen for no reason but the color of their skin.” Yet study after study has shown precisely this. Leonard accuses those who document and oppose police violence of distorting the truth to serve their own ends, but it is people like Leonard, who believe that policing and incarceration are “colorblind,” who are refusing to acknowledge the truth.

Leonard concludes his article by arguing that protecting truth means protecting white people, who, he argues, are in danger of having “all sense of their higher destiny sponged from their memories and their consciences” with the result that “no hand will recall how to tend the orchards of our culture and our heritage.” He sounds like the racist commentators who believed that casting a black actor to play Achilles amounted to “depriving [Europeans] of their culture and their history.” Leonard’s agricultural metaphor of “white culture” as an orchard emerges from a diatribe earlier in the article blaming black Africans in Zimbabwe for that country’s impoverishment. Leonard is referring to the decision by Zimbabwe’s dictator Robert Mugabe to allow his supporters to seize farms owned by white Zimbabweans, who Leonard says were “massacred or forced on pain of death to abandon their lands.” It is true that agricultural production in Zimbabwe declined steeply after this, but Leonard’s predictably racial explanation for that decline ignores numerous other factors that have hampered the new farmers’ success: lack of certainty about how long they can stay on the land, lack of infrastructure, women’s lack of rights around land ownership, and government corruption. He also ignores evidence of improving conditions. Again we find that this self-styled “truth-tender” looks more like those he accuses of pushing “an agenda.”

But Leonard, of course, isn’t actually interested in truth of the humanitarian crisis in Zimbabwe. He needs Zimbabwe to support his analogy between whiteness and intellectual and philosophical superiority. “The entire terrain of the mind is like that Rhodesian earth,” he writes, using the colonial name for Zimbabwe, “tended almost exclusively by men of European descent, coveted and abused by men whose ancestors for centuries had ignorantly trampled it.” Leonard is committed to a hateful nostalgia for a time when the unquestioned superiority of European culture — for which ancient Greek thought was a convenient if deceptive shorthand — could be used to justify the oppression and exploitation of the rest of the world. Gesturing toward the fear of “white genocide” common among white supremacists, Leonard writes that “if the Whites are erased from this world, the will to truth … which is our pride and our birthright, our might and our glory, will perish with [them].” If Leonard’s vision of ancient Greek philosophical thought is the “true” one, then good riddance.

To avoid giving AltRight.com traffic we have linked to archived images of the site. A link to the site itself can be found here.