Radix Journal is a website founded by Richard Spencer, editor of Altright.com and president of the white supremacist think tank “National Policy Institute,” both of which Pharos has documented. In January 2019 Radix Journal published an article about the Saturnalia, an ancient Roman festival that is popularly but probably erroneously believed to be the origin of Christmas. The article, entitled “Christmas, the Saturnalia and the Jewish Saturn”, makes the anti-Semitic argument that the Roman festival, and Christmas itself, commemorates a pre-historic time when “Jews or proto-Jews ruled” before “the restoration of an Aryan hegemony.” 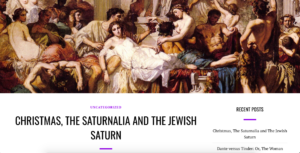 The article’s author is Mark Brahmin, whose poetry appears on the white supremacist web forum Stormfront and who produced a video for Richard Spencer entitled “Commercial for Fascism.” But Brahmin’s main interests are evident from his own website, The Apollonian Transmission, which aims “to prove the existence of a coherent, decipherable symbol language plied by Jewish Esotericists against racial and sexual competitors.” The analysis of the Saturnalia that he offers in Radix Journal is one example of his method, which is “esoteric” in that it attempts to reveal in European mythologies a hidden or symbolic narrative of “Aryan” ascendancy and so prove the superiority of the so-called “Aryan race.”

Underpinning Brahmin’s analysis is a claim that in Roman mythology the god Saturn represents Jewish people and Jupiter represents “Aryans.” He bases this claim about Saturn on a passage in the Roman historian Tacitus’ Histories that says that “the Jews are said to have been refugees from the island of Crete who settled in the remotest corner of Libya in the days when, according to the story, Saturn was driven from his throne by the aggression of Jupiter.” Tacitus is referring to the Roman mythological story that Saturn was often said to have presided over a “Golden Age” in the mythological past that ended when Jupiter (the Roman Zeus) and the Olympian gods overthrew Saturn (the Roman Kronos) and the Titans. Brahmin describes these Titans as being “Jewish dominated and controlled” and says that the victory of Jupiter “represents the restoration of an Aryan hegemony” over them.

Tacitus’ claims are the key to everything Brahmin says, but they are almost certainly wrong: for example, there were certainly Jewish people in Crete in ancient times but Tacitus is the only ancient writer to claim they lived there. The standard commentary on this passage of Tacitus says that it “fall[s] sadly below Tacitus’ usual standard as a historian”…”not so much for his anti-Semitism,” which the commentator notes is widespread in ancient writers, “but for the general ignorance and silliness displayed.” In particular the commentary notes Tacitus’ evident preference for “absurdities” over information that we know was available to him in other writers. For example, the commentary suggests that Tacitus has invented a connection between Jewish people and Saturn in order to create an explanation for the coincidence that the Jewish sabbath took place on the day of the week that in Roman culture was named after Saturn, our “Saturday.”

Nevertheless, from the connection that Tacitus makes between Saturn and Jewish people, and from the connection of the Roman Saturnalia to the god Saturn, Brahmin argues that the period commemorated by the Saturnalia was a period of Jewish rule. Another significant feature of the Saturnalia for Brahmin was the “role reversals” it permitted: slaves enjoyed a lavish banquet, and one ancient source even says that the masters served the food. Brahmin thus describes the age of Saturn as a time when “Saturn, the Semitic slave, ruled Jupiter, the Aryan master.” Finally, it is significant for Brahmin that the reversals of the Saturnalia mark a departure from the “normal” and in Brahmin’s view proper organization of society, in which the “Aryan” rules Jewish people just as Jupiter, in mythology, triumphed over Saturn. “Jupiter,” he writes, “represents the Aryan force that overthrows the Jewish power to establish a eugenic direction personified in his son Apollo.”

The Saturnalia, for Brahmin, is thus both a commemoration of Jewish rule and a rejection of that rule. Celebrated as it is with revelry and “in the nadir of Winter” it associates Jewish rule with “decadence, degeneracy, darkness and death.” Brahmin also makes this point with his choice of image for his article, Thomas Coutures‘ Romans of the Decadence (1847). The painting shows the aftermath of a Roman party; the artist probably intended it as a criticism of the decadence of the French aristocracy of his time, but Brahmin takes it as a historical representation of a Roman Saturnalia and thus, under his interpretation of that festival, of the decadence of the imaginary period of Jewish rule.

Throughout the article Brahmin is using the word “Aryan” not in the sense it is used today — to describe the ancient inhabitants of northern India, who actually called themselves “Aryans” — but in the way that was popular in 19th century racial pseudo-science, as a designation for a supposedly superior “race” from which white Europeans were descended. Brahmin is correct, however, that the Roman Jupiter and the sky god that these ancient Aryans worshiped are derived from the same very ancient divinity.

Brahmin published his article shortly after Christmas because his identification of the Saturnalia as a commemoration of Jewish rule should be understood also as a rejection of Christianity, a rejection which signals Brahmin’s ideological and intellectual roots. If Christmas has its origins in the Saturnalia, the argument goes, then the holiday is a continuation of the commemoration of Jewish rule that Brahmin identifies in the Roman festival. White supremacists that locate the “pure” racial origin of white people among ancient Indo-European ancestors view Christianity as a fundamentally Jewish practice (a perverse notion given the long history of anti-Semitism in the Christian church and the deep connections between Christianity and white supremacy in America) and turn to pre-Christian, northern European mythology as a more “racially” acceptable alternative.

In his emphasis on Aryanism, however, Brahmin should be located rather in a tradition of white supremacy that turned to ancient India, not Northern Europe, as the ancient origin of the white, European “race.” This movement, for example, made Hitler the reincarnation of the Hindu (and so “Aryan”) god Vishnu. Such mystical interpretations of Hindu mythology in support of white supremacy have in fact been revived by many white nationalist groups. In this light one may even wonder if Mark Brahmin’s name is a pseudonym, intended to associate himself with the Brahmins who in India are the traditional keepers of sacred knowledge such as that our author claims to be divulging. And it doesn’t hurt that they are also the highest caste in the social hierarchy of India, which white supremacists admire because its continuing existence allows them to claim that hierarchy is native to “Aryan” culture.

It is striking, however, that Brahmin turns not to Indian mythology but to the Classical. He senses that references to Hindu mythology and even Norse mythology would not confer enough authority to his hateful claims with his intended audience, so he turns to Rome, to Greco-Roman mythology, to the traditionally respected historian Tacitus, in order to articulate his anti-Semitic worldview.

To avoid giving Radix Journal traffic we have linked to archived images of the site. A link to the site itself can be found here.